Is Charging Your Customers $500 per Bad Review Ethical?

It has recently come to light that a New York Hotel (Union Street Guest House in Hudson, New York) has a clause etched into its contract stating that:

“[There] will be a $500 fine that will be deducted from your deposit for every negative review of USGH placed on any internet site by anyone in your party”.

The good news is that they:

“Will refund this fee once the review is taken down”.

As the review page went viral, it gathered over 500 1-star reviews over the course of just a couple hours. Yelp has since removed the majority of these reviews, but more keep pouring in.

The negative review has since been removed.

As of August 5, 1 P.M. PDT, these are their standings on Facebook and Yelp: 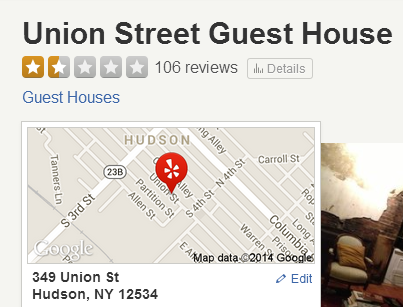 So what are your thoughts? Do you think that as a business owner, they have the right to charge whatever fees they deem fit? Or do you think that people are entitled to their First Amendment rights without having to be penalized by the place that they chose to patronize?

We certainly think that it is completely unethical to do so. But playing Devil’s Advocate, it is also unethical for people to write reviews for a place they have not visited or otherwise been a customer of. Moreover, Yelp should do its due diligence to make sure that every fake review is removed.

So what’s the lesson?  Businesses have to accept that there are open forums for business and service reviews.  Attempting to suppress reviews via threats, non-disparagement clauses, or legal action can backfire.  The best way to combat negative reviews is to:
1.  Provide customers with the very best service.
2.  Engage directly with your customers for feedback (before they go public).
3.  Encourage reviews from all your customers which includes the “happy but silent majority”.

Let us know your thoughts in the comments below!